The rebound hammer test is a Non-destructive testing method of concrete which provide a convenient and rapid indication of the compressive strength of the concrete. The rebound hammer is also called as Schmidt hammer that consist of a spring controlled mass that slides on a plunger within a tubular housing.

The principle is based on the impact energy produced by the falling hammer which will rebound elastically. The rebound energy of the hammer is proportional to the compressive strength of the concrete. 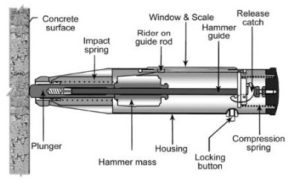 A rebound hammer consists of a spring-controlled solid metal (usually steel or magnesium alloy) mass, known as the head, attached to a hydraulic piston; when the head strikes the surface under test it causes deceleration and compression of the concrete and forms an indenter.

Some rebound hammers do not consist of a spring-controlled head; instead, they have two metal balls. This type is known as a ball rebound hammer.

The impact energy produced by the falling head will rebound elastically from the surface under test and is proportional to compressive strength of the concrete.

The rebound energy of the head is measured by an instrument called glass bulb accelerometer, which consists of a thin-walled glass bulb partially filled with mercury attached to the piston rod on one side and on the other side connected to an operating mechanism through a linkage which converts the movements into electrical signals for recording.

The reading of rebound is defined as the average of three measurements taken at 5/8 in, 1 in and 2 in above the indenter.

The interpretation of these readings can be done by using a nomogram which is a graphical representation of a mathematical equation.

There are various types of rebound hammers available on the market depending on their cost and type of mechanism used.

The table below shows the four types of rebound hammers and their principle:

* Schmidt hammer is an obsolete term for a rebound hammer (sometimes called a drop weight hammer) and it has been replaced in modern terminology by the word “Rebound Hammer”. [1] Criteria for Classifying Testing Methods, ASTM Standard C42-83a

Correlation between compressive strength of concrete and rebound number

The most suitable method of obtaining the correlation between compressive strength of concrete and rebound number is to test the concrete cubes using compression testing machine as well as using rebound hammer simultaneously. First the rebound number of concrete cube is taken and then the compressive strength is tested on compression testing machine. The fixed load required is of the order of 7 N/ mm2 when the impact energy of the hammer is about 2.2 Nm.

After this test it was found that there is a very close relationship between compressive strength and rebound number which shows the fact cement contents has got good influence on compressive strength of concrete. Thus, understanding the physical properties of materials helps us to develop new structural materials with higher physical property values.

Proposed Experiment: The experiment is performed at the construction division of IIT Bombay, India. A standard impact testing machine was used for this experiment. For performing the test, Hydrated Silica Fume (HSF) is added to the concrete mix along with Ordinary Portland Cement (OPC) and sand, to reduce the water content and improve workability.

Read here about dumpy level and its types

Advantages of Rebound Hammer Test are as under:

There are following advantages of rebound hammer test.

1) It is used for determination of modulus of elasticity, i.e., Young’s Modulus, which shows material toughness and strength e.g., metals more than timber.

2) The result is highly sensitive to any change in the elastic properties of the material.

3) It is the most accurate method for determining modulus of elasticity.

4) The effect of moisture etc., can be controlled by using separate standard moisture boxes.

Disadvantages of Rebound Hammer Test are as under:

There are following disadvantages in rebound hammer test.

1) It does not give yield point in metals; it can be derived from slope of stress-strain diagram.

3) Temperature and humidity affects the result.

4) It is time-consuming and require more skill to obtain results.

5) Dishonest user may not give accurate result.

7) The equipment is very expensive and need large area to install it which prevent its installation in the shopping mall.

1.The concrete surface should be smooth, clean and dry.

2.Ant loose particles should be rubbed off from the concrete surface with a grinding wheel or stone, before hammer testing.

3.Rebound hammer test should not be conducted on rough surfaces as a result of incomplete compaction, loss of grout, spalled or tooled concrete surface.

4.The point of impact of rebound hammer on concrete surface should be at least 20mm away from edge or shape discontinuity.

5.Six readings of rebound number is taken at each point of testing and an average of value of the readings is taken for final results. There should be at least 10 test points in a 100mm x 100mm area, or in some larger area depending on the size of the slab.