Hydration Of Portland cement is defined as “dissolution-precipitation” process. During this process cement in mix reacts with water and transforms from fluid phase to porous solid matter known as concrete.

This process of hardening during hydration process is known as setting of concrete. Strength continue to develop after hardening stage. 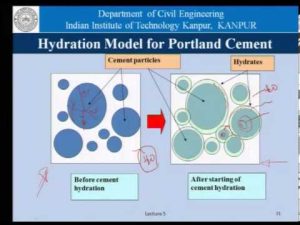 Hydration process several stages which will be explained later in this article.

In order to look closely at hydration process, it is imperative to look at clinker constituents of cement as they play a major role in hydration reaction. Here are following major phases of cement clinker

Tri-Calcium silicate is a problematic phase as far as hydration of cement is concerned. It is the most reactive phase of cement which reacts with water and a lot of heat is released.

C4AF does not play a major role in hydration kinetics and is considered of little importance.

Stage 1 shows a peak which is associated with C3A reaction with water. A lot of heat is released as shown in graph in small time span. This reaction produces rod-like crystals known as ettringite.

After initial reaction of C3A there comes a brief period where little or no activity take place. This time period is known as “dormant period” Many theories are presented in order to under stand dormant period (also known as induction period).

Some of popular theories are listed below, Explanation of these theories is out of scope of this article and can be studied from other source.

After dormant period heat evolved again increases due to reaction of C3S which is the principle phase of cement and is responsible of almost 80% strength gain.

After C3S, C2S comes into play and continue to produce CSH gel over time. C2S reaction is slow as compared to C3S as evident from the graph but it continues for a long time and is responsible for long term strength of concrete.

CSH is the main product of hydration and mainly responsible for concrete strength. CSH is poorly crystalline material having variable composition

CH also known as portlandite is produced along side with CSH. CH is comparatively weaker material due to its crystals orientation. CH value can be reduced using pozzolonic supplementry cementitious materials.

C3S is primarily responsible for Concrete early strength. Almost 80% of hydration is completed after 28 days, that is why we take 28 days cylinder strength in design offices.